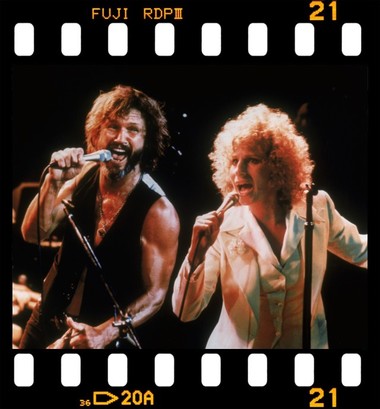 I was fully expecting to dislike this version of A Star Is Born, since I’d already seen the 1954 version and loved it. I’d also already seen the 1937 original, and while it wasn’t as good as the remake, I still appreciated it. My mom said she couldn’t stand the 1976 version, and we usually have pretty similar taste, especially when it comes to musicals. Surprise, surprise, I loved it.

The reason I was able to enjoy A Star Is Born so much is because I pretended it was a completely different movie. If you’ve seen either of the two earlier versions and expect a traditional remake, you’ll probably hate it. John Gregory Dunne, Joan Didion, and Frank Pierson may have based their concept on a previous story, but they’ve written a completely different script. So, for the purpose of telling you my thoughts on the film, I won’t compare it at all to the Judy Garland version.

Kris Kristofferson might be the only person in the world who can pull off a bearded, ‘70s look while still coming across as hygienic. It doesn’t make sense that I think he’s wildly attractive, since I usually hate that look, but I was in heaven with the amount of eye candy in this movie. Perfectly cast as a popular rock star, he starts the movie past his peak. He drinks, snorts cocaine, forgets his lyrics onstage, and performs outrageous, life-threatening stunts. He chances upon Barbra Streisand singing in a nightclub and is so impressed with her talent, he propels her to stardom. And of course, they fall in love.

I really am surprised by how much I liked this movie, since so much of it isn’t usually my cup of tea. The 1970s isn’t my favorite decade, and I usually find the clothes and hairstyles irritating. With exception to two of the plentiful songs in the movie, I didn’t really like the music. Barbra Streisand’s character has plenty of bite to her, which I don’t usually find sympathetic. Somehow, putting all the elements together worked beautifully. Somehow, it made total sense that Barbra gave Kris attitude when they were first getting to know each other. I won’t be buying the soundtrack, but Barbra’s vocal talent was extremely impressive; it was very understandable that audiences in the film were wowed by her.

Both leads put their whole hearts into their performances, and even though this was the third time I’d seen the story, I still cried during each of their “big scenes”. If you know the story, you know which ones they are. I’d always thought of Kris as just a good-looking singer, but I was surprised by how much dramatics he poured into his scenes. Barbra is always a good performer, and in her romantic one-on-one scenes, she’s tender and vulnerable. She’s been paired up with a very long list of good-looking leading men—Robert Redford, Ryan O’Neal, Jeff Bridges, Omar Sharif, Nick Nolte, and young Mandy Patinkin—and I’ve never seen her with greater, sweeter, lovelier chemistry than with Kris Kristofferson. The way they look at each other is so beautiful, like how Jack Carson looked at Doris Day in Romance on the High Seas. If you like the Oscar-winning song “Evergreen”, you’ll love the scene in the movie when they sing it together.

My advice is to either watch this version first or forget you’ve seen any other version when you rent it. He’s gorgeous, she’s in her perm-prime, and if you like ‘70s rock, you’ll really love it.

DLM Warning: If you suffer from vertigo or dizzy spells, like my mom does, this movie might not your friend. In the opening scene, strobe lights are used during the concert, and that might make you sick. In other words, “Don’t Look, Mom!”

Want to watch it?  Click here to watch it on ok.ru. And thanks "The Projection Room" for posting!