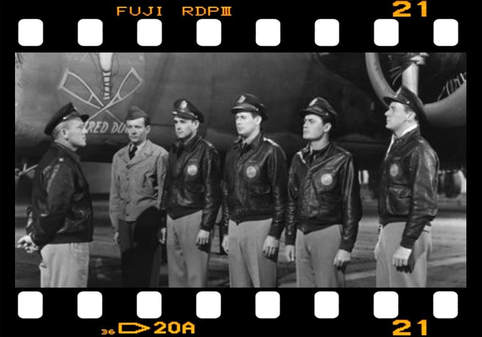 I know Thirty Seconds Over Tokyo is a famous classic, but it doesn’t really stand the test of time. Back in 1944, when WWII wasn’t over yet and morale films were still being cranked out, I could understand how this movie resonated with audiences.
​
Van Johnson stars as a pilot who, among his fellow soldiers, trains for combat immediately following Pearl Harbor. There’s Dan DeFore, Robert Mitchum, and Robert Walker, but besides Van, no one is really given any background to his character. Van is married to Phyllis Thaxter, and they’re expecting a baby, but he and his friends volunteer for a very dangerous flying mission to Tokyo. Spencer Tracy guest stars as the commanding officer, and as expected, the flight mission isn’t problem-free. In this two-and-a-half hour movie, there’s really only one good scene, and my commitment to avoiding spoilers prevents me from sharing it. When there’s a hitch in the mission, the boys are put in danger, and the scene is quite suspenseful. Besides that, the scenes between Van and his wife are extremely cheesy, and there are enough “buy the farm” scenes to last five more movies.

Want to watch it? Click here to see it on ok.ru and thanks "Classic Cinema Central Seleus B" for posting!