Richard Nixon: A Political and Personal Portrait
​​    by Earl Mazo 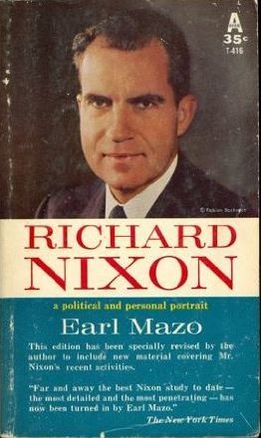 What’s really fascinating about this biography of Richard Nixon is that Earl Mazo wrote and published it before the subject became President Nixon. Imagine a book titled A Political Portrait that hasn’t even touched upon his first presidential run, let alone his two terms as commander-in-chief! Needless to say, I found Mazo’s angle very interesting. He wrote about Nixon’s congressional career, and his time as Vice-President, parts that are often ignored in more modern books since Nixon’s presidency is so much more memorable.
​
I’ve read several books written about and by Nixon, and I always try to be fair in my recommendations. I know not everyone is as big a fan as I am, so the books I like won’t go over as well with most people. This is one of those books. It’s pretty obvious Earl Mazo liked Nixon, and if you don’t share his opinion, you’ll probably have a strong urge to put the book down. But if you like Nixon, or you don’t mind reading a book that paints him in a positive light, this is a good one!